For some reason I always seem to get along with those gardeners that collect ferns and I think it’s because they pay close attention to botanical detail, which is something that I greatly admire. Ferns are not just some nondescript aggregate of leafy greens that grow in the shade; they are wonders of plant form and come in many colours, including purple, white and reddish-orange. They can be found growing on every continent but Antarctica in both temperate and tropical climates and have been around for millions of years, as evidenced by fossils found right here at Kanaka Creek. So I thought I’d take you on an in depth voyage through the diverse world of hardy outdoor ferns.

Japanese Painted Ferns – There’s no better place to start than with the ‘least green’ fern I know, Athyrium niponicum var pictum or Japanese Painted Fern. These herbaceous beauties are a bit slow growing but really pop in the shade garden with their silver and purple fronds. ‘Pewter Lace’ brings even more silver to the forefront, ‘Ursula’s Red’ a broad band of wine-red, while ‘Godzilla’ is a larger cultivar.

Maidenhair Ferns – The Maidenhair ferns are a delicate looking family, with ebony stems starkly contrasted by iridescent lime green leaflets. Our native species Adiantum aleuticum eventually grows into a bold clump about 2.5’ tall and is very similar to the eastern species, A. pedatum; both are hardy to USDA zone 3 and are herbaceous in nature. For a spectacular evergreen groundcover try the Himalayan Maidenhair (A. venustum) as it features new growth that is tinted bronze and matures around 6” tall.

Oak Fern – While we’re on the subject of using ferns as groundcovers I should mention our native Oak Fern or Gymnocarpium dryopteris. With even moisture they form small thickets 6-12” tall through which you can grow other woodlanders such as Solomon’s Seal or Bleeding Heart. ‘Plumosum’ features ruffled leaflets and a fuller appearance.

Hart’s Tongue Fern – Asplenium scolopendrium is a very tropical looking fern with undivided fronds that is actually native to Europe and eastern North America and hardy to USDA zone 5. It actually prefers a neutral to slightly alkaline pH, so add a little lime at planting time if your soil is particularly acidic. ‘Cristatum’ features crested tips, while ‘Kaye’s Laceratum’ looks a lot like leaf lettuce with its intricately divided fronds.

Ostrich Fern – These herbaceous ferns are native to the northern hemisphere and are the source of edible fiddleheads (a key ingredient in my lemon Alfredo fettucine), although they need to be cooked in order to remove natural toxins. They form elegant upright vase-shaped crowns with separate fertile fronds, and spreads by means of rhizomes. Matteuccia struthiopteris ‘The King’ is a larger form (up to 6’) and at USDA zone 3, is very cold hardy.

Autumn Fern – This is the fern I show people who ‘supposedly’ hate them, as the reddish-orange new growth is absolutely spectacular. Dryopteris erythrosora is an evergreen species and even tolerates partial sun with even soil moisture. The cultivar ‘Brilliance’ has the best spring display in my opinion.

Deer Fern – Our native Blechnum spicant is one of the best compact evergreen ferns available, tolerating both partial sun and summer drought once established. The separate fertile fronds stand straight up in the center of the clump and darken at maturity, looking a bit like a hair comb. Closely related is Blechnum penna-marina or Alpine Water Fern which features tiny fronds (6” long) that form a dense groundcover and emerge an eye-catching coppery-red in spring. 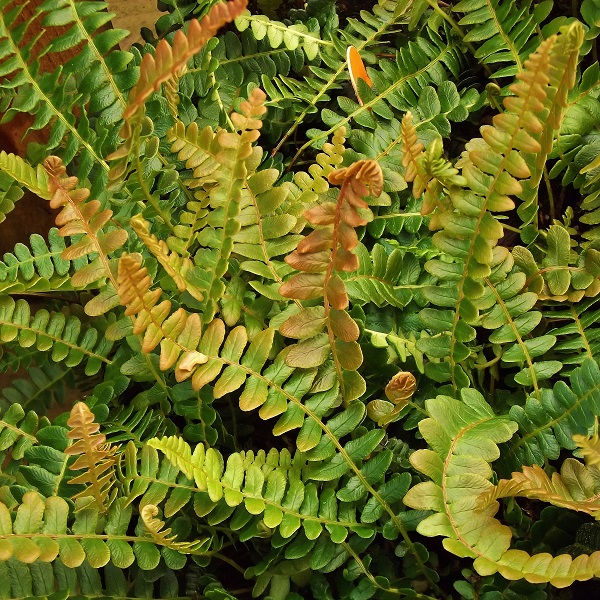 East Indian Holly Fern – Arachniodes simplicior ‘Variegata’ is an evergreen fern with attractive deep green fronds accented with a gold stripe down the midrib, although at USDA zone 7 it does require a sheltered site. The Upside Down Fern (Arachniodes standishii) is much hardier at zone 4 and features lacy recurved fronds that are semi-evergreen in nature.

Lady Fern – Athyrium filix-femina is a BC native and provides us with a multitude of attractive cultivars including ‘Dre’s Dagger’ (with criss-cross pinnae), ‘Frizelliae’ (thin beaded fronds) and ‘Vernoniae Cristatum’ (crested tips). But by far my favourite is ‘Lady in Red’ (sometimes listed as Athyrium angustum) as the contrast of apple-green foliage and burgundy stems is quite spectacular.

Tasmanian Tree Fern – Dicksonia antarctica is the hardiest of the tree ferns but at USDA zone 9 it does require some winter protection to survive our cold weather. That said, once it develops its palm-like trunk this exotic fern is a real show-stopper for a tropical-themed landscape and they can also be grown in containers and brought indoors for winter.

Sword Fern – Our native Sword Fern (Polystichum munitum) is a much underutilized species as it is reliably evergreen, useful for stabilizing slopes and even tolerates sun with even soil moisture. The closely related Japanese Tassel Fern or Polystichum polyblepharum has many of the same qualities but with a little more finesse, as it has finely cut glossy fronds that emerge forest green and darken with age.

Royal Fern – Osmunda regalis is a very tall architectural species with coarse leaflets that are not what one expects from a fern, coupled with tassel-like brown spores borne at the tips. It can tolerate very wet soils and eventually develops root hummocks or mounds at its base and is herbaceous in nature. ‘Purpurascens’ has purple-tinted new growth and stems. Cinnamon Fern or Osmunda cinnamomea (now classified as Osmundastrum) has a nice upright form with pale green leaflets, but the separate fertile fronds emerge from the center of the plant with spires of cinnamon-brown spores.

Male Fern – Another interesting species with many diverse cultivars, although most Dryopteris filix-mas are semi-evergreen in nature. A few of my favourite varieties include ‘Parsley’ (crinkled pinnae tips and fronds), ‘Linearis Polydactyla’ (thin skeletal leaflets) and ‘Cristata’ (crested pinnae and forked tips).

Hybrid Painted Ferns – Athyrium x ‘Ghost’ is a cross of Lady and Japanese Painted Fern which has this unusual milky-green colouring that really stands out in the shade garden. Similarly, Athyrium otophorum or Auriculate Lady Fern has lime green leaflets (borne on contrasting burgundy stems) which eventually shift to a greyish-green at maturity, a hue that really seems to stand out in low light.

Sensitive Fern – Onoclea sensibilis is another species with very coarse ‘unfern-like’ fronds which emerge with a hint of red on the leaflet margins. It tolerates wet soils rather well and gets its name from the fact that it begins dieback starting with the first frosts of late autumn.

Giant Chain Fern – Woodwardia fimbriata is a rare native fern found on southern Vancouver and the Gulf Islands with impressive fronds that can get up to 4’ long here. The only concern is that it requires a very sheltered site, as it is only USDA zone 8 hardy.

Well I’ve only scratched the surface of what is available for hardy ferns and to be honest I have even left out a few of my favourites like Korean Rock Fern (Polystichum tsus-simense) and Dragon’s Tail Fern (Asplenium x ebenoides). For those of you interested in bringing ferns into your home, we have provided a link to an older article (Top Twelve Indoor Ferns) https://www.amsterdamgreenhouses.com/post/top-twelve-indoor-ferns .

Your Guide to Autumn Foliage

A Recipe For Success: Create An Elegant Succulent Pumpkin Planter