Vines and the Vertical Garden

The vertical garden is an essential element of any landscape, as it is those arbors, fence lines, pergolas and bare walls that catch the eye immediately, so what we choose to grow on them is as important as the structures themselves. With this in mind, I thought I would provide you with a brief overview of vines and climbing shrubs to help inspire and guide you towards the best choices for your garden.

Climbing Hydrangea & Schizophragma – Both these deciduous vines are closely related and feature either white or pale pink blooms that much resemble a lacecap hydrangea in form. Hydrangea anomala subsp. petiolaris is the more common climbing hydrangea, but the gold variegated form ‘Miranda’ is well worth looking for. In a similar vein, Schizophragma hydrangeoides ‘Moonlight’ features fantastic pewter foliage with green veining, while ‘Roseum’ offers pale pink bloom bracts. Both species are useful in partial shade and cling with aerial roots.

Virginia Creeper & Boston Ivy – Parthenocissus quinquefolia (five-leaved) and tricuspidata (three lobes) are the most common species available. They both feature deep green foliage that shifts to dramatic shades of red to burgundy in autumn, often revealing blue berries after leaf drop. These sun-loving vines are capable of clinging to masonry or cement walls with rounded holdfasts, although be warned that they will leave a mark when removed, particularly on wood siding. ‘Veitchii’ (smaller foliage) is the most common cultivar of Boston Ivy, while var. englemannii (smaller leaflets) is a comparable Virginia Creeper variety.

The harder to find Parthenocissus henryana features prominent white veining that shows well in the fall but at zone 6, it is not as hardy as Virginia Creeper (Z3) or Boston Ivy (Z4).

Ornamental Kiwi – Most of us are familiar with Arctic Beauty Kiwi (Actinidia kolomikta) with its unusual pink-white variegated foliage (which is more prominent on male plants) and with both sexes present, small edible fruits are definitely a possibility. The much rarer Actinidia polygama or Silver Vine features tapered green leaves that develop white tips as they mature and is as attractive to felines as catnip. Both species thrive in partial shade exposures.

Trumpet Vine – Campsis radicans and grandiflora have the vigour of Wisteria but with a much later blooming season, usually mid to late summer here in coastal BC. There are a number of colour options including gold (‘Flava’), salmon (x tagliabuana ‘Madame Galen’), orange (‘Indian Summer’) and reddish-orange (‘Atropurpurea’, ‘Flamenco’). The trumpet-like flowers held in terminal clusters definitely attract hummingbirds but be warned, root suckers are rather common. 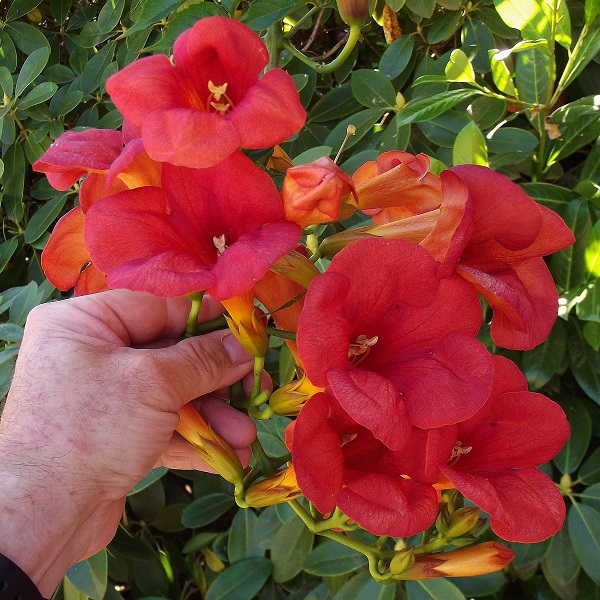 Honeysuckle – With so many Honeysuckles to choose from, which one do you pick? I think fragrance is a great starting point and Woodbine (Lonicera periclymenum) is one of the best; both Early Dutch (‘Belgica’) and Late Dutch (‘Serotina’) feature purplish-red and yellow blooms with a heady scent, while the hybrid ‘Honey Baby’ has a compact (6’) growth habit. The Japanese Honeysuckles (L. japonica) are equally fragrant with their yellowish-white flowers and semi-evergreen nature, your best choice here is definitely ‘Halliana’. Lonicera henryi is a reliably evergreen species with thin tapered leaves and smaller blooms, but at USDA zone 5 it is hardier than Evergreen Clematis (C. armandii). Less fragrant but still quite attractive to hummingbirds are ‘Mandarin’, ‘Dropmore Scarlet’ and ‘Gold Flame’, which has some scent.

Jasmine & Trachelospermum – Jasmine is the common name for dozens of species but the one most people are looking for is Common Jasmine or Jasminum officinale; a semi-evergreen vine with pinnate foliage and potently fragrant white blooms (used to make Jasmine tea) borne throughout the summer. A gold-leaved form, ‘Fiona Sunrise’, is also available. Pink Jasmine (Jasminum x stephanense) bears pale blooms with some fragrance and is hardier than the aforementioned species. Alas, Winter Jasmine (J. nudiflorum) while stunning with its yellow late winter blooms, has no fragrance whatsoever. Lastly, I’d like to mention Star Jasmine (Trachelospermum jasminoides) which is a vigorous evergreen shrub that can be trained as a vine and features pendulous clusters of highly scented white blooms from late spring into early summer.

Passion Flowers – There are only two species of hardy Passion Flowers for us to choose from; those being the semi-evergreen Blue Crown (Passiflora caerulea) and the herbaceous Maypop (P. incarnata), which are USDA zone 7 and 6, respectively. They both feature intricate flowers, with P.caerulea bearing purplish-blue and white blooms and Maypop producing fragrant pinkish-purple flowers with wavy filaments during the summer.

Climbing Roses – When choosing climbing roses you are usually presented with two options; grafted and own-root. Grafted climbers are always larger initially but own-root provides the assurance that if a cold winter should kill the crown, the growth from the base will still be the rose you purchased, not the rootstock. The best climbing roses for coastal conditions are ‘Westerland’ (apricot blend fading to pink), ‘Dublin Bay’ (red), ‘Goldener Olymp’ (yellow), ‘Antique 89’ (rose-white) and ‘New Dawn’ (shell pink); these also pair well with Clematis. 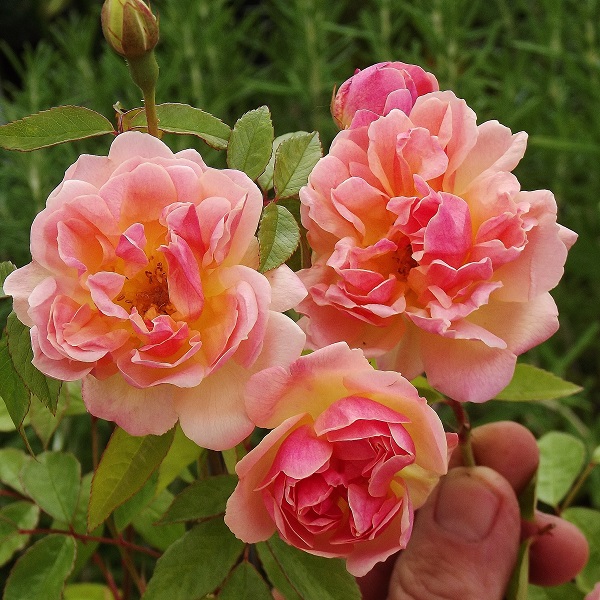 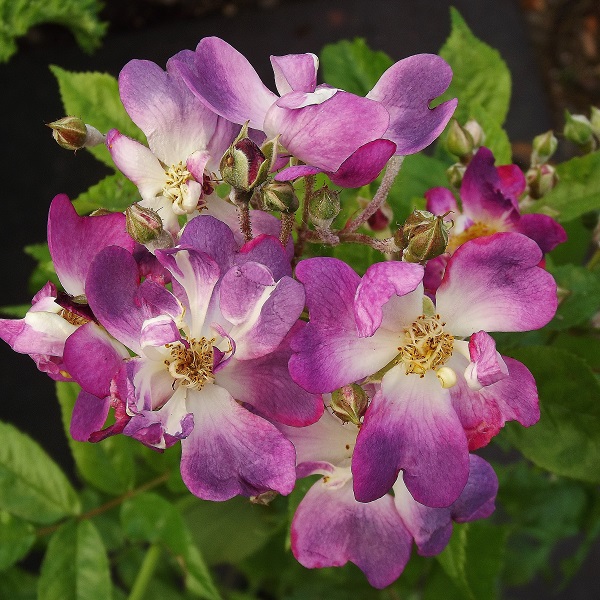 Ornamental Grapes – While a bit hard to find, these ornamental grapes are grown primarily for their fiery autumn foliage. Both Vitis ‘Brant’ and V. coignetiae or Crimson Glory Vine are capable of scrambling up trees, while the Teinturier Grape (Vitis vinifera ‘Purpurea’) is a little more restrained and features burgundy new growth shifting to red in the fall; the tart grapes don’t always ripen but can sometimes be used for jelly.

Chocolate Vine – Akebia quinata is a twining vine with compound palmate foliage and lightly fragrant purple blooms held in pendulous clusters that start as an orb and open to three petals. It flowers in April and may produce fruit if cross-pollinated by a different cultivar such as ‘Shirobana’ (white blooms) or ‘Rosea’.

Hops – Humulus lupulus is a twining herbaceous vine that is the source of the hops used to bitter or flavour beer. The green-leaved ‘Cascade’ and ‘Nugget’ are the most common varieties of these, while the golden ‘Aureus’ (or ‘Summer Shandy’) and ‘Taff’s Variegated’ add interesting foliage that brightens the background of any perennial border.

Wisteria – There are generally two species of Wisteria we look to for covering our arbours, those being Chinese (W. sinensis / twines counter-clockwise) and Japanese (W. floribunda / twines clockwise) with the former having shorter flower racemes and slightly less fragrance. Wisteria floribunda also provides more options with double flowers (‘Violacea Plena’) or those of white (‘Snow Showers’ & ‘Alba’), and pink (‘Rosea’, ‘Pink Ice’). ‘Issai’ or ‘Domino’ is a free-flowering hybrid with two-tone blooms of near white and purple. Kentucky Wisteria (W. macrostachya) is a good choice for colder climates (USDA Z3) and sites where a less vigorous vine is required; ‘Blue Moon’ and ‘Aunt Dee’ are both excellent cultivars.

Non-Invasive Ivies – English Ivy (Hedera helix) is on the invasive plant list of most provinces and really should not be used as a vine. There are however two other large-leaved species, with the most commonly available being the beautifully variegated Persian Ivy (H. colchica ‘Dentata Variegata’) with creamy-yellow margined leaves that mature at 4-5” across. Variegated Canary Island Ivy (H. canariensis ‘Variegata’) features white margins but at USDA zone 7, is less hardy than the Persian Ivy.

Odds and Ends – If you are hoping to find a fast-growing vine then look no further than ‘Mile-a-Minute’ or ‘Russian Lace Vine’ (Polygonum or Fallopia baldschuanica). Also known as Climbing Buckwheat, this deciduous vine quickly twines up to 40’ and bears creamy white blooms in summer; perfect for covering an empty arbor or ugly storage shed. Crossvine or Bignonia capreolata much resembles Campsis at a distance and bears fragrant reddish-orange spring flowers. It is actually native to southern Ontario. Lastly we have American Bittersweet (Celastrus scandens), a deciduous vine grown for its yellowish-orange fruits which split in autumn to reveal red seeds – both a male (‘Hercules’) and a female (‘Diana’) are needed. 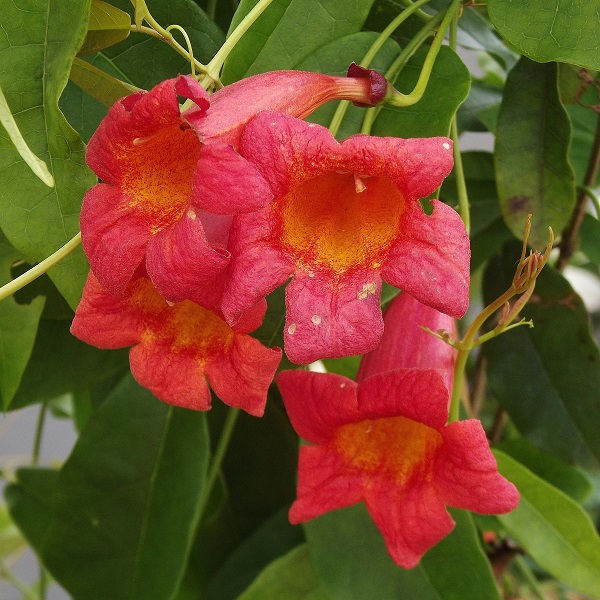 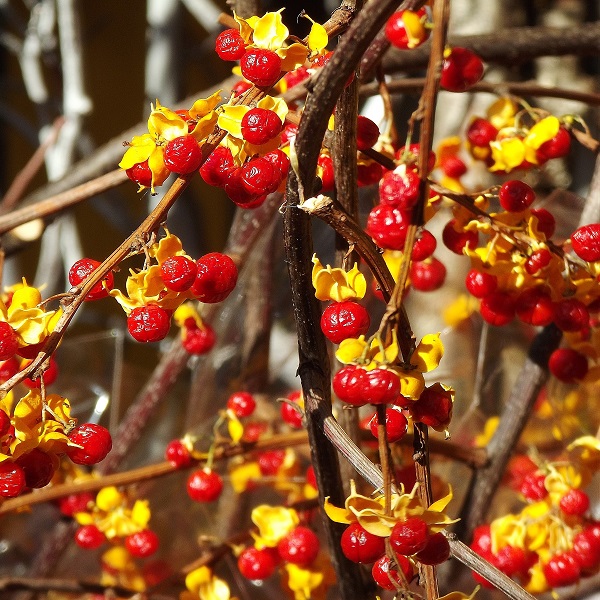 Well that completes my overview of vines for the vertical garden but for those of you hoping for a little insight into Clematis, I have attached an older article below that you can click on. I am looking forward to seeing you soon in the vine section but in the meantime take care of yourselves.

Growing Your Own Garlic